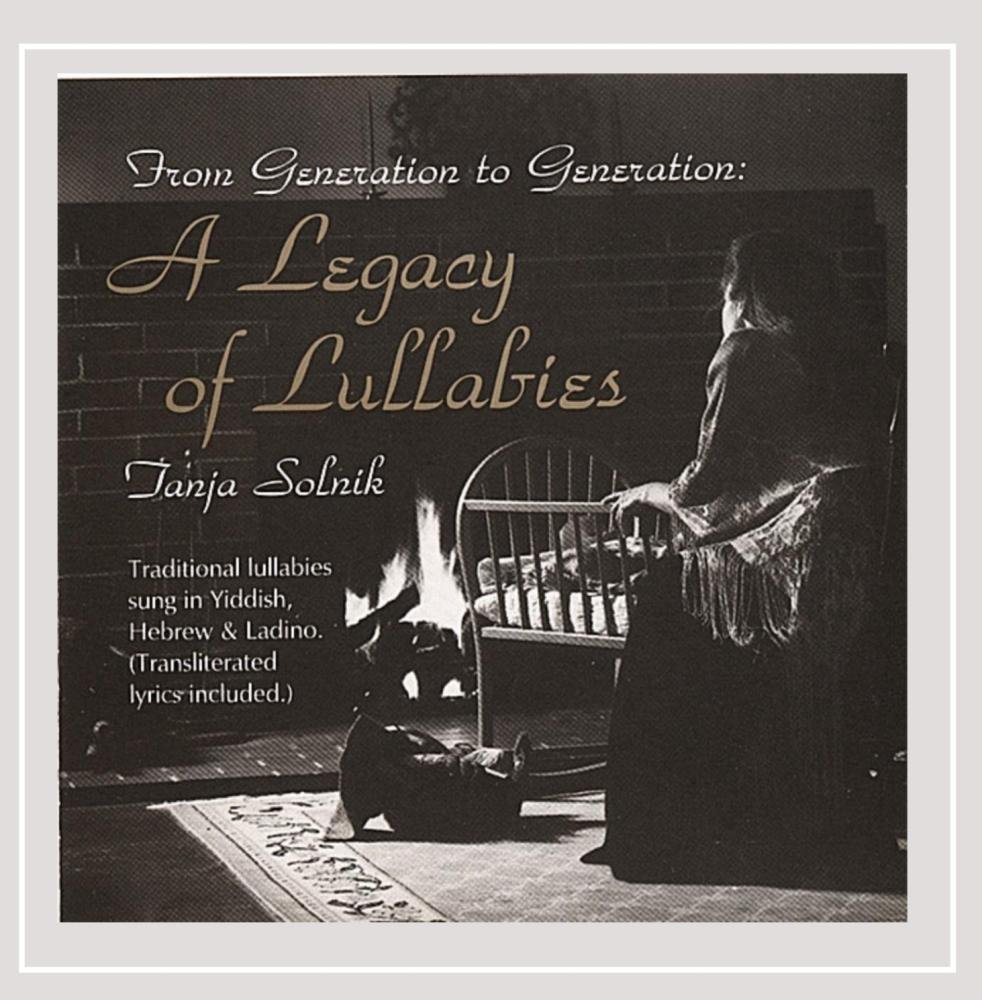 From Generation To Generation: A Legacy Of Lullabies by Tanja Solnik

While the language of the eleven songs in this collection of lullabies is Yiddish, Ladino or Hebrew, listeners quickly understand the universal language of a mother's love. Simple acoustic backups, mainly guitar and balalaika, are a foil for this singer's exquisite, unaffected voice. -- From Parents' Choice®"br""br""From Generation to Generation: A Legacy of Lullabies" is a hauntingly beautiful compilation of traditional Jewish lullabies from singer Tanja Solnik. Whether she is singing the soothing Yiddish to Zing Faygeleh, Zing, or the familiar Hebrew of Numi, Numi, Solnik manages to invest each song with the kind of emotion and immediacy that draws kids in. Her Ladino melodies are particularly striking, and her accent flawless. And these lullabies work. This reviewer popped the cassette in the car tape player one night last week to try to quiet a screaming 20-month old, and within minutes, the little angel was staring quietly through the moonroof, jabbering placidly to himself. Thank you, Tanja. In fact, this reviewer has two copies of the cassette, one for crib and one for car. -- "i"Los Angeles Jewish Journal, April 14, 1995"br""br"A wonderfully beautiful album full of angelic traditional lullabies performed in Yiddish, Hebrew and Ladino by Tanja Solnik, lovely and splendidly moving for any generation or language. Gorgeous and stunning to any ears, the CD is perfect for new parents or grandparents who want to share it with their grandchildren. -- "i"'Kidbit', Copley News Service, August 2, 1995

You can't go wrong with this lovely lullaby collection. The gentle beauty of "From Generation to Generation: A Legacy of Lullabies" could relax the most restless of nappers. This universal language of parental love crosses all cultural barriers. -- "i"Los Angeles Times, October 14, 1995"br""br"You don't have to be Jewish to savor this strikingly beautiful lullaby album. The recording's diamond-cut perfection is matched by Solnik's angel-pure soprano, which fairly floats amidst understated arrangements. -- Family Fun Magazine, December/January 1997

Here is a lyrical album which will loose a tear, educe a smile, and magically change an unhappy day (or night) into a dreamily delightful one. Tanja Solnik, in a clear and gentle voice, tempered with tenderness and laced with love, brings treasured lullabies out of the should-not-be-forgotten past. Remember your childhood (or the one you wish you had!), and create a legacy for your own child. (Jewish Community News)

Tanja Solnik has been singing and performing Jewish music since the age of six. As a child, she appeared with show business legends Myron Cohen, Molly Picon, Milton Berle and Mickey Katz. Her off-Broadway appearance in Mickey Katz's review "Hello Solly" was extended by popular demand. She also toured with Mickey nationwide for three years.

"p"After a high school hiatus, Tanja recorded several records in Italy and sang the theme song to an Italian movie. Back in Los Angeles, she recorded in French for Saban Records. Along with fronting several dance bands, her own country band and frequent studio singing, she began cantorial studies with Cantor Allan Michelson. (She is frequently featured as a cantorial soloist.) You can also hear Tanja singing the theme song on Disney's "Princess Collection" video series.

Tanja has continued to create her own unique blend of traditional Jewish world music, by founding DreamSong recordings with her longtime friends, Gary Nesteruk and Jim Hershman.

Your own page with blogs, photos, videos, chat and more...

What you're saying about EnglishClub

This Week in History 🔊

2001: USA Suffers 4 Simultaneous Attacks
The world watches in shock and awe as 4 commercial airliners wreak havoc in the USA.

What is Science? : Carl Sagan's warning about democracy, science and technology

StewMac Pickup Clearance Gauges : Learn about the cat that was voted into office.

Listen&Learn: Bioluminescence : Learn about creatures that can produce light.

A laugh a day keeps the doctor away : Everything goes full circle sooner or later

One by one : Everything goes full circle sooner or later

Listen&Learn: The Library of Alexandria : Learn about the ancient library of lost knowledge.

The Vocabulary of Censorship

When I use a word, it means just what I choose it to mean - neither more nor less.' Humpty-Dumpty (Lewis Carroll)

Nobody has the right to obey.'